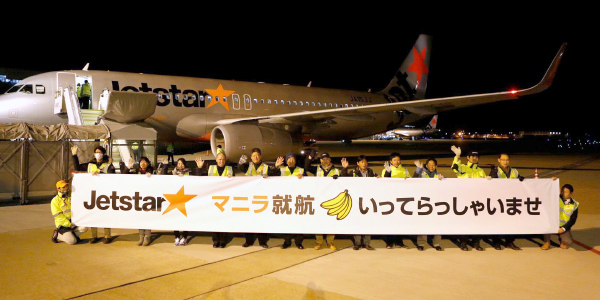 Jetstar Japan’s first international service from the Philippines has taken to the skies in a big way with its inaugural flight to Tokyo departing at full capacity, as travellers from Manila – and beyond – enjoy the new low-fares connection offered by Japan’s largest low-cost carrier.

The first Japanese low-cost carrier to operate services in Manila, Jetstar Japan’s inaugural flight from Manila to Tokyo departed at full capacity at 1.05am, arriving at Tokyo’s Narita Airport at 6.15am. This is the first of its three new international routes scheduled for roll-out in the coming month.

The success of the inaugural flight heralds a new dawn for travellers here and signals the support by local travellers for our brand and low fares to Japan, said Jetstar Japan’s Chairman, Mr Masaru Kataoka, in Manila today.

“Our first flight from Manila to Tokyo is sold out and we are encouraged by the solid bookings for the next few months, said Mr Kataoka.

“While a number of other carriers currently offer services to Tokyo, we are confident that Jetstar’s new direct service and timings will introduce accessibility and greater choice to travellers all year-round.

“Jetstar operates the first direct flight to Tokyo’s Narita Airport and the last flight back to Manila, giving savvy Filipino travellers more time at their destination and the benefit of stretching their holiday from dawn to dusk,” said Mr Kataoka.

“Filipino travellers familiar with the Jetstar brand have come to expect a standard for reliable on-time performance, great value and a consistent level of customer service whenever they fly with us from Manila to Singapore.

“Now, as the largest LCC in Japan, our customers can fly to Tokyo and connect to many destinations across Japan through its dense domestic network,” Mr Kataoka added.

Boasting the largest fleet of 20 aircraft amongst LCCs in Japan, Jetstar Japan is the only LCC that flies directly to Japan’s three major cities of Tokyo, Osaka and Nagoya. In terms of network, Japan’s largest LCC with more than 50% of the market share offers the largest number of domestic routes amongst Japan’s low-fares airlines.

The airline has carried close to 13 million passengers since its launch in 2012.

Jetstar Japan had recently announced additional services from Manila to Osaka on 1 April (currently served by sister airline, Jetstar Asia) and commencement of the new Manila-Nagoya service on 7 April.

Jetstar Japan currently operates up to 100 services a day and flies to 11 domestic destinations in Japan and two international destinations.

Manila is the third international destination added to Jetstar Japan’s roster after the launch of services to Hong Kong and Taipei in 2015.

The new return services are operated on Jetstar Japan’s 180-seat Airbus A320, with a flight time of just over five hours.