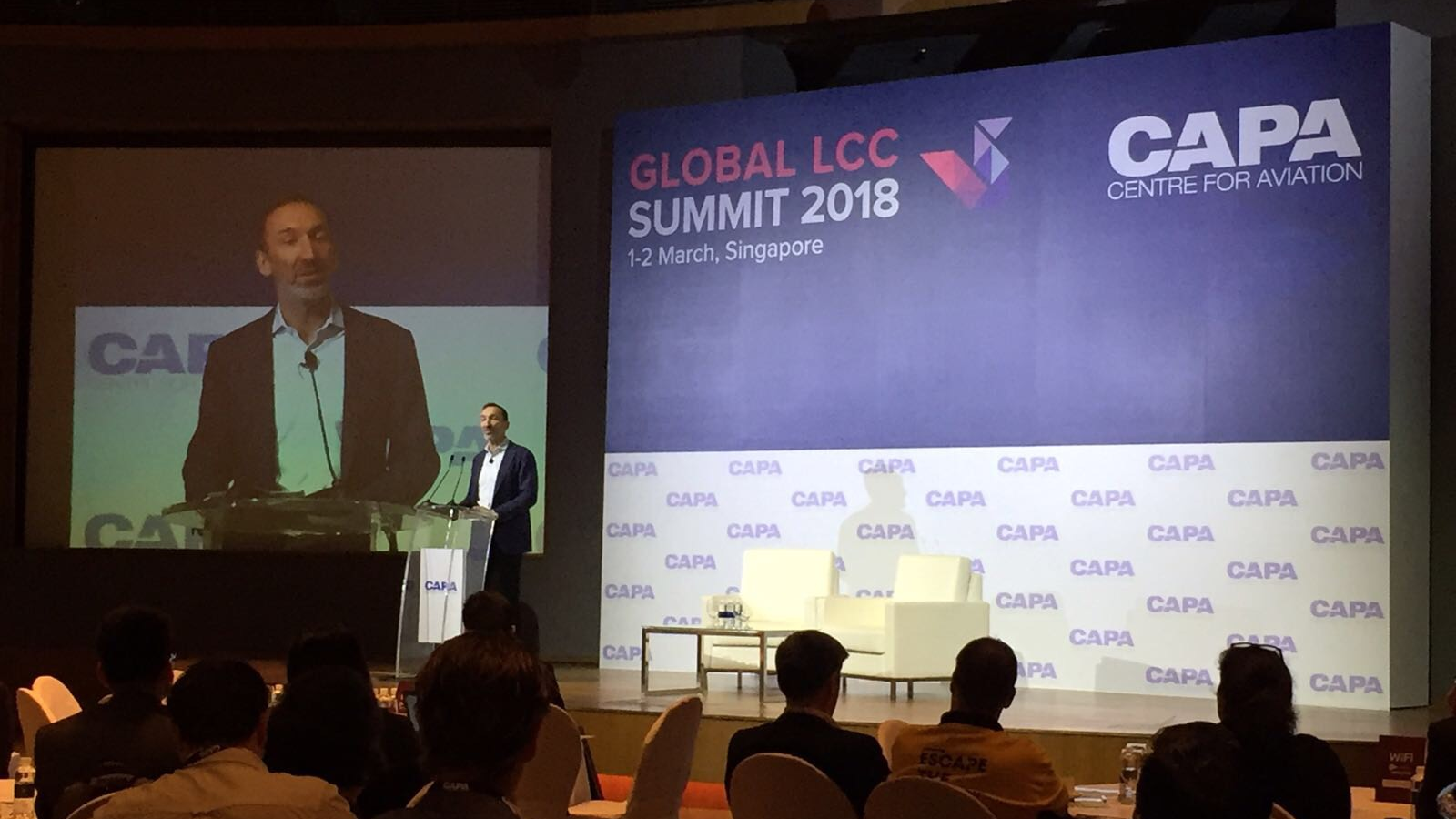 Jetstar Group CEO Gareth Evans spoke at the CAPA Global LCC Summit 2018 in Singapore on 2 March, 2018. This is the text of his speech.

It’s great to be back speaking at a CAPA conference. The last time I spoke at CAPA I was the CEO of Qantas International, and today I’m speaking to you as the new CEO of the Jetstar Group.

I’ve been in the role for four months, and as well as losing the tie and growing a beard, I’ve had an amazing time.

I’ve taken over an airline group which is humming. Jetstar has a strong, passionate and energetic team and a unique and strong culture. It's a “can do” attitude that drives the organisation, drives the change, drives the willingness to innovate, to communicate, to collaborate, and makes us the airline that we are.

We also have a really bright future, which I’m very excited to a part of.

Today I thought I’d talk through a little bit about the opportunity that exists for low fares travel in Asia as well how Jetstar plans to make the most of this opportunity. And specifically how our smart business model, focus on customer and investments in technology are helping us achieve this.

Firstly, I think it’s fitting that Peter asked Jetstar to make a key note address at their inaugural global LCC conference because we would argue that we are the world’s first truly global LCC.

Thirteen years after Qantas established Jetstar on the east coast of Australia we have grown to be a global LCC.

Jetstar Asia, which operates out of Changi Airport here in Singapore is a great example of how global we have become. It has more than 30 codeshare and interline agreements with airlines as diverse as Emirates, Ethiopian Airlines, Jet Airways, LATAM and United.

As many in this room would know, it’s not common for full service airlines to connect their customers on to a LCC, so this is a real credit to Jetstar Asia – led by Bara who is here today and his team.

One thing that stands out for Jetstar Asia is its OTP. In 2017 they were the most punctual airline – of both full service carriers and LCCs – in the Asia Pacific, and the second most reliable LCC in the world.

Qantas will be putting even more of its customers on Jetstar Asia from later this month, when it will be redirecting more of its flying from Australia to the UK through Singapore.

Combined with Jetstar, this makes the Qantas Group the second largest airline group in Singapore after the national carrier.

And while Jetstar started in Australia and has grown to be a global airline group – the opportunity lies here in Asia.

Today, Asia-Pacific is the largest aviation region in the world. There are 1.2 billion passengers today which is one third of global traffic.

Aviation in Asia will grow to 2.8 billion passengers by 2034, or 40 per cent of the total global passenger traffic and more than Europe and North America combined. This is staggering growth.

Today there are more Jetstar aircraft flying in Asia or to and from Asia than in Australia and New Zealand which has been our traditional heartland.

50 per cent of the Qantas Group’s capacity is dedicated to Asian routes. Jetstar flies to 10 Asian countries and territories and 54 Asian destinations. We have over 100 services per week to China and its territories.

To make the most of this opportunity we have put in place a simple business model and partnered with strong local partners who know the local market.

Our business model is pretty simple. We offer consumers a seat at the lowest possible price and provide them with choice of extras depending on their individual needs and preferences.

And for those consumers who want to travel with Jetstar but want more, such as meals, in-flight entertainment, extra baggage, additional legroom, flexibility of last minute flight changes or choice of other extras can do so for a fee.

The other key to this business model is what we call the dual-brand strategy.

This is where Qantas and Jetstar work together to segment the market and jointly make network, scheduling and sales decisions. It makes us a pretty formidable competitor.

In the Australian domestic market the dual brands account for more than 80 per cent of the profit pool.

We have great flexibility to target segments of the market and quickly make changes as market dynamics change.

A good example of the dual brand strategy at work is flights between Australian and Honolulu. We thought that this would become a Jetstar market because of the demand for leisure holiday makers. What we found was there was demand for both segments and we have grown both brands to Honolulu. Unlike other airlines who try and have seats to suit on the same aircraft, we have the luxury of having separate brands who can focus on each market segment.

Another example is on the Gold Coast. After pulling Qantas off all Gold Coast routes a few years ago we noticed that there was more business travel – particularly from small and medium size businesses and premium leisure travellers – so Qantas came back on to Sydney-Gold Coast and then Melbourne-Gold Coast and operated alongside Jetstar. And now both Qantas and Jetstar are performing well on these routes.

Another key focus for us is focussing on and investing in customers.

There are a few things I would call out on this.

The other key focus we have at Jetstar is on making smart investments in technology.

Without a doubt the future for airlines lies in technology and digital.

And our biggest investment in technology is still in in our fleet.

Last week we posted our half year financial results. Jetstar posted another record profit which in Australian dollars was $318m – around one third of the Qantas Group profit.

As a former CFO who still gets excited by numbers (and these were a great set of numbers) but what excited me more was announcing that we would take 18 Airbus A320neo LR aircraft from 2020.

The A321neo LR aircraft can fly much longer distances, are significantly more fuel efficient and carry more customers than the older A320 classic aircraft they are replacing. This gives is a lot of flexibility and opens up new opportunities with our network.

These next generation aircraft have the extended range we need to fly from Melbourne and Sydney to Bali. That means we can redeploy some the 787 Dreamliners that Jetstar currently use on these key routes to new markets – places like Vietnam, China and Hawaii – or new destinations.

We have around 80 A320/A321neos on order with Airbus which will be strategically deployed across the group, and are excited about what opportunities this opens up for us in the region.

The other big investments in technology are more on the digital side.

I’ve got no doubt that future interactions with our customers are moving more and more to these [holds up iPhone].

A recent example of this is our online virtual assistant, Jess.

Customers had been using Jess on Jetstar.com since 2013, with 9 million customers getting instant answers to simple questions.

But today around two thirds of customers are now using Facebook to make enquires about their bookings. So, we have expanded Jess’s capability by providing instant responses to questions on Facebook Messenger.

During the recent disruptions in Bali caused by the Mount Agung volcano, Jess assisted 3,000 customers, and resolved almost three quarters of those instantly.

We are also using technology to help with our operation. Our pilots are utilising iPads which has seen our cockpits become effectively paperless. We have also invested in a smartphone app that allocates tasks to our ground staff at our biggest ports (MEL and SYD) in real time installed a new system for our airport staff – front and back of house – in key ports. The app adjusts to the dynamic environment we operate in so our team members are where they’re needed most, like as passenger loads change, or as schedule and gate updates are received.

So in wrapping up, I’m sure you can tell that I’m extremely excited about Jetstar’s future.

I have no doubt that success will be found by focussing on customers, investing in technology and taking advantage of our unique business models.

The Jetstar Group is one of Asia Pacific’s fastest growing airline brands with one of the most extensive ranges of destinations in the region. It is made up of Jetstar Airways (subsidiary of the Qantas Group) in Australia and New Zealand, Jetstar Asia in Singapore, Jetstar Pacific in Vietnam, and Jetstar Japan in Japan. Jetstar branded carriers operate up to 5,000 flights a week to more than 85 destinations. The Jetstar Group carried more than 37 million passengers in financial year 2017.